What to See in London

Some of the places that you must see are mentioned below. All these places have a entry fee of 20 - 5 pounds however With London pass all these are for you to see for FREEEEEEEE 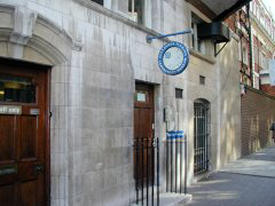 Discover for yourself the secrets of the laboratory in which Alexander Fleming discovered penicillin in 1928. An in-situ reconstruction of the laboratory, displays and a video uncover the remarkable story of how a chance discovery became a lifesaving drug destined to revolutionise medicine. The extensive archives of St Mary's Hospital are also open for research. 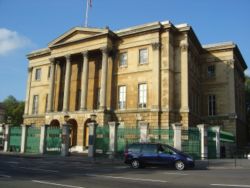 Apsley House was the London residence of the Dukes of Wellington and stands alone at Hyde Park Corner, on the south-east corner of Hyde Park, facing south towards the busy traffic circulation system. The house is now run by English Heritage and is open to the public as a museum and art gallery, although His Grace the current Duke of Wellington still uses part of the building as a part-time residence. It is sometimes referred to as the Wellington Museum. It is perhaps the only preserved example of an English aristocratic town house from its period. The practice has been to maintain the rooms as far as possible in the original style and decor. It contains the 1st Duke's collection of paintings, porcelain, the silver centrepiece made for the Duke in Portugal, c 1815, sculpture and furniture. Antonio Canova's heroic marble nude of Napoleon holding a gilded Nike in the palm of his hand, made 1802-10, standing 3.45 metres to the raised left hand. It was set up for a time in the Louvre and was bought by the Government for Wellington in 1816 (Pevsner) and stands in Adam's Stairwell 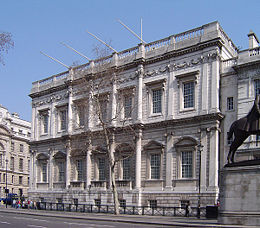 The Banqueting House is the only remaining component of Whitehall Palace, and is found at the Trafalgar Square end of Whitehall, London.
It is the grandest and most familiar survival of the architectural genre of banqueting house. Formerly part of the Palace of Whitehall, it was designed by Inigo Jones in 1619 and completed in 1622 with assistance from John Webb. In 1649 King Charles I of England was executed on a scaffold in front of the building.

Inside the building there is a single two-story double-cube room which is decorated with paintings by Sir Peter Paul Rubens that were commissioned by Charles I in 1635 to fill the paneling of the ceiling. Rubens's painting depicts the Apotheosis of James I. The Banqueting House introduced a refined Italianate Renaissance style that was unparalleled in Jacobean England, where Renaissance motives were still filtered through the engravings of Flemish Mannerist designers. The roof is all but flat and the roofline is a balustrade. On the street facade all the elements of two orders of engaged columns, Corinthian over Ionic, above a high rusticated basement, are locked together in a harmonious whole.

The Banqueting House was probably planned as part of a grand new Palace of Whitehall, but the tensions that eventually led to the Civil War intervened. In 1685 the Banqueting House became the first building in England to use crown glass in its windows. Later, in the fire that destroyed the old Whitehall Palace the isolated position of the Banqueting Hall preserved it from the flames.

The Undercroft was originally designed as a drinking den for James I and a place where he could escape the rigors of public life. The King would come here to savour a glass of wine from his extensive cellars, or simply enjoy some private time with his favorite courtiers.

Benjamin Franklin House is a museum in a terraced house in Craven Street, London, close to Trafalgar Square. It is the only surviving former home of Benjamin Franklin, one of the Founding Fathers of the United States. The house dates from circa 1730 and Franklin lived and worked there for sixteen years.
Conservation
36 Craven Street retains a number of original features (include original floorboards, original ceilings, and original fireplaces) with relatively few later alterations. Current conservation policies emphasise the need for minimal modern interventions.
Modern facilities
The "Historical Experience" includes an actor portraying historical characters associated with the house along with dialog, sound, lighting and special effects. The character used in the "Historical Experience" is Polly Hewson, daughter of Franklin's landlady who became a "second daughter" to Franklin.
The "Student Science Centre" allows students to re-create experiments from Franklin's sojourn in London. It includes a Medical History Room (focused on the medical research work of William Hewson), a Discovery Room (containing historical artifacts) and a Demonstration Room (in which students can replicate Franklin's experiments).
The "Scholarship Centre" on the top floor of the House is a centre for study of the many subjects Franklin pursued 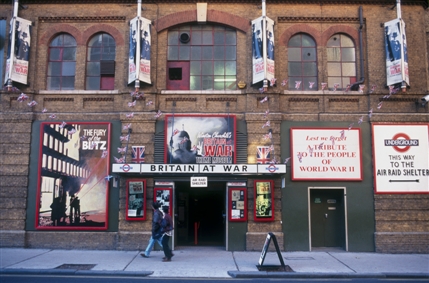 The Second World War was the most turbulent and eventful period in the history of the 20th century. It affected the lives of millions of people all over the world, advanced technology and changed political boundaries and ideas of human behaviour. But what was it really like? How did it really feel to be a British citizen during the Second World War? What did people eat and wear? Winston Churchill's Britain at War Theme Museum can answer these questions and many more.

Get the closest possible insight into what life was really like. The Britain at War Experience recreates the LONDON BLITZ in all its fury with special effects highlighting the sights and sounds, the artifacts, and even the dust and smoke of an air raid at its height Take the lift to the London Underground air raid shelter and see where thousands spent sleepless nights. Keep up to date with wartime news in the underground cinema or read it in the memorable news pages. Enter the BBC radio studio and tune into Rome, Washington, London and Berlin for the latest messages from Churchill, Chamberlain, Roosevelt, Ed Murrow, Hitler and Lord Haw Haw. Specifically designed to tie in with National Curriculum especially KS2-3. Primary and secondary education packs available include worksheets, activities, questions for the visit and a guide book. Special 'dressing up' sessions for school parties including tin helmets, gasmasks and uniforms. *Free preliminary visits for teachers and help with planning visits.* Huddle in an Anderson shelter and hear all the terrifying noises of an air raid overhead. See the Drury Lane dressing room and catch a glimps of the "spirit of the times" reminding you of the stars of the war years. Look in at Rainbow Corner - a club to entertain the GI's with "Varga" pinups. See real wartime bombs, rare documents and photographs in the unique Bomb Disposal display...you can even hear a ticking bomb. Learn about the Land Army Girls and other "women at war" who fought their battles on the Home Front. Window shop along the little shops of Southwark and see prices in pounds, shillings and pence. See how people coped with food and clothing rationing. Share the excitement and anxiety of the evacuees as they wait to be transported to new homes. Gas masks, ration books..it's all here factually presented, realistically portrayed. An exciting and educational adventure for all ages.
Britain at War Experience, 64-66 Tooley Street, London SE1

The Cartoon Museum is a museum in London for political cartoons, comic strips and books. As well as holding a collection of cartoons it has a library of over 3000 books relating to the subject.

The museum features over 1200 exhibits, and is, as of 2006, curated by Anita O'Brien, who noted "There has never been a cartoon museum here... In spite of the very strong historical tradition here, there has always been a very strong ambivalence towards comic art." [1] It was opened on the 23 February 2006 by the Duke of Edinburgh.[2] In its mission statement the museum declares itself "dedicated to preserving the best of British cartoons, caricatures, comics and animation, and to establishing a museum with a gallery, archives and innovative exhibitions to make the creativity of cartoon art past and present, accessible to all for the purposes of education, research and enjoyment.
Address: 35 Little Russell Street
London
WC1A 2HH
Telephone: +44 (0)20 7580 8155